Trouble in Lafayette Square: Assassination Protest and Murder at the White House

Using short stories, author Gil Klein, takes the reader on a tour through history using true stories from Lafayette Square, the park that sits across from the White House. Each chapter illustrates key moments and eras of U.S. history by highlighting some of the personal relationships and collective actions that have helped shape America today. The engaging, fast paced, and rarely told stories include:
Book Introduction:
So, as I sit here on Bernard Baruch’s bench, I can look to my right and see the Decatur House where, in 1820, American naval hero Commodore Stephen Decatur was rushed back from a duel only to die a few hours later in the parlor. Or I can contemplate how the same house was part of a social scandal at the beginning of the Jackson presidency that nearly did in the president and may have helped bring on the Civil War. Or, if I look closer toward the White House on the southwest side of the park, I can see a determined Puerto Rican nationalist striding toward the Blair House just around the corner to meet his compatriot to launch a gunfight to try to assassinate President Truman, who was staying at the house. I can imagine a time when no buildings surrounded the park except the White House and see an enslaved woman working away in her garden and selling vegetables to buy her freedom. If I look to my left, I can see the trees near Madison Place where a congressman shot and killed the son of Francis Scott Key in a jealous rage. Just beyond that is where William Seward’s mansion stood. On the night Lincoln was shot, a confederate of John Wilkes Booth burst into the house and nearly killed Seward. I can imagine the adjoining mansions on H Street behind me built by great friends John Hay and Henry Adams, who lived with their wives, and think of Clover Adams’s suicide that led to the creation of a great piece of art. I can recall the women suffragists who emerged from the headquarters of the National Woman’s Party on the square at the beginning of America’s entry into World War I to wave banners that compared President Wilson to Kaiser Wilhelm. Oh, the ruckus that started. Following the precedent those suffragists set, people from across the country and around the world now converge on the park to practice their constitutional right to protest the president’s policies and their grievances against the American government. And what happened in the park that may have led a senator to commit suicide?

Table of Contents:
Foreword, by John Kelly 9
Acknowledgements 11
1. A Day in the Park 13
2. A Hero’s Death in Lafayette Square’s First House 20
3. A Social Fracas Nearly Destroys a Presidency 29
4. The Plight of Slaves on Lafayette Square 40
5. Murder in Broad Daylight 50
6. A Spy, a Prig and an Assassin: The Civil War Comes to Lafayette Square 60
7. Tragedy of the Five of Hearts 71
8. Women Suffragists Invent the White House Protest 82
9. Shootout at the Blair House 96
10. An Incident in Lafayette Park Leads to a Senator’s Suicide 108
11. A Presidential Drug Bust 115
12. The Never-Ending Protest 121
Notes 131
Bibliography 137
About the Author 141 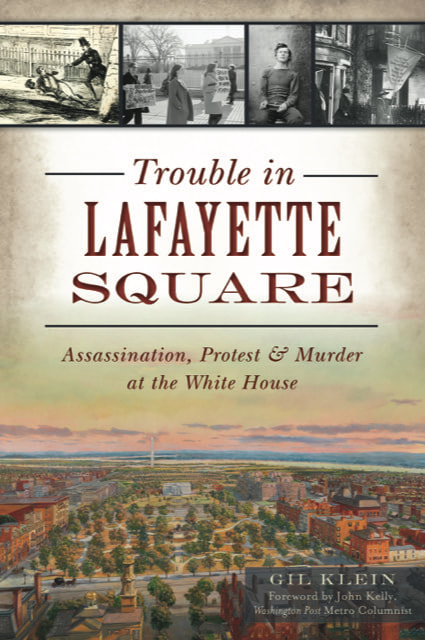